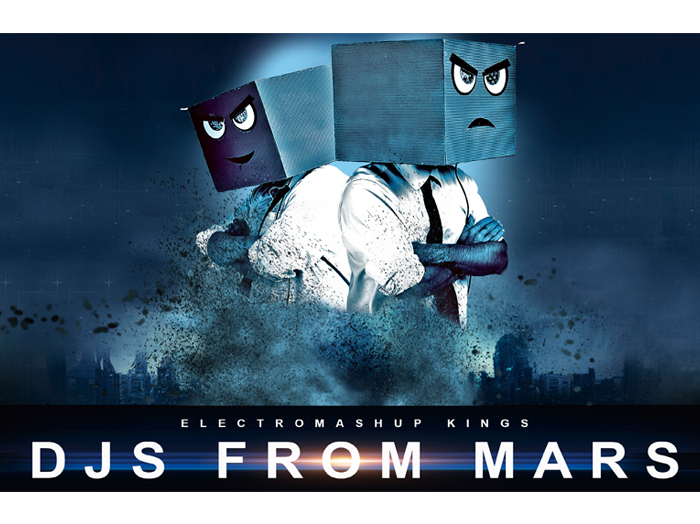 Djs From Mars bring the mash-up attitude into Electronic Dance Music. Their style is a 360° blend of every kind of musical genre, with the add of their “Alien” basslines and beats. They start remixing pop and rock hits for their own gigs, just for fun, and soon they are recognized as one of the biggest names in the bootleg scene. Their videos on YouTube reached over 70 million views and the hype is still growing... Their production skills are soon noticed by labels around the world that start asking (with the help of their USA manager Jason Nevins) Djs From Mars official remixes for Sean Paul, Pitbull, Sophie Ellis Bextor, Dirty Vegas, Fragma, Ciara, Coolio, Ennio Morricone and the list goes on... Their tracks and remixes are supported and playlisted by the biggest djs like David Guetta, Carl Cox, Chuckie, Firebeatz, Lost Frequencies, Ummet Ozcan, Laidback Luke, Paul Van Dyk, Bob Sinclar, Vinai and more.... In 2013 Djs From Mars are officially recognized as one of the most popular acts worldwide, getting their own spot in the DJ MAG TOP 100 DJS. In 2015 they are featured as main characters in the Gillette advertising campaign “Shave Forth” - the commercial video reaches 18 million views on YouTube in a couple of weeks... In the last 6 years they’re touring non-stop in the 5 continents: USA, Canada, Brazil, China, India, Australia, Japan, Mexico, Indonesia are on the list of their recent tours, and basically every country in Europe received a martian visit so far. With a tour schedule of at least 120 shows yearly in the last 5 years, they’re one of the most booked acts in the whole dj scene. In the last 2 years they had their own residency at the Flamingo Pool in Las Vegas 2016 is also the year of a new direction for Djs From Mars: after years and years focused on bootlegs and remixes, they started also releasing original tracks: one of them was released on Deorro’s label, Pandafunk, and in the last year they were constantly featured in the ElectroHouse Beatport Top100. More original releases are already planned for the next months, so, a new era has just begun.