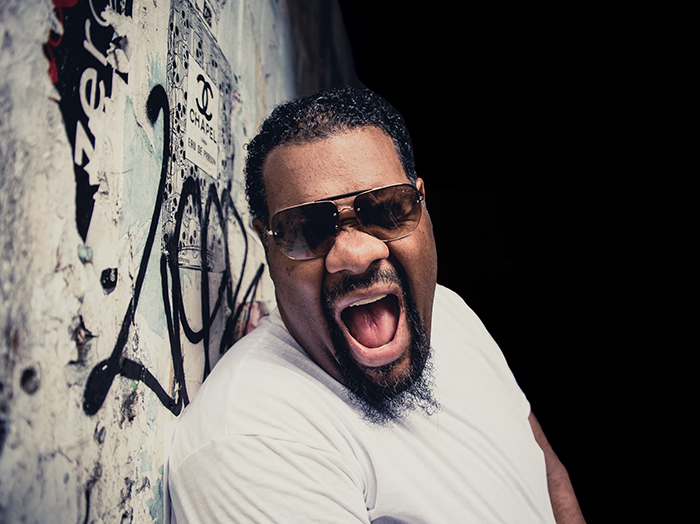 Fatman Scoop is notorious for shouting his name and requesting that you do whatever he tells you… so put
your damn hands up! Whether it’s Scoop’s rambunctious baritone hyping a track or video cameos for P.Diddy,
50 Cent, or Elephant Man to name a few, Scoop’s booming voice, catchy hooks, electrifying energy and
charismatic presence never go unnoticed!
As Mr. Do-it All (dubbed by Hot 97), Scoop has been holding down his popular (daily) radio show for years on
the nations most listened to hip-hop station, NY’s Hot 97 FM. Scoop has also been growing his 42 market
syndicated show (Full Throttle Radio) over the past year and change; in addition to guest spots as celebrity
DJ/Co-host of BET’s 106 & Park. At one time, Scoop even had a popular column in Source Maga zine called
‘Scoopology’. With Scoop’s never ending credentials he has even recorded music for blockbuster films like ‘You
Got Served’ and ‘Save the Last Dance.’ Furthermore, Scoop has created original songs and/or recorded
commercials for brands such as Mountain Dew, Reebok, Nike and Bombay Sapphire to name a few, and has
collaborated or been featured alongside music artists and tracks produced by award winning producers or
artists like Timbaland, BabyFace, Busta Rhymes, Dance Hall Kings Sean Paul and Elephant Man. In a category
that includes dozens of successful music artists, Fatman Scoop is considered the ultimate party hit maker
(think Lil Jon minus production plus a larger physical and vocal presence.) Just ask the countless number of
artists that have recruited Fatman Scoop to make their party tracks.